Time to Change, Time to Talk about Mental Health

Home/Time to Change, Time to Talk about Mental Health
Previous Next

Time to Change, Time to Talk about Mental Health 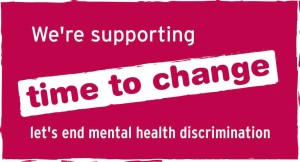 A survey of more than 7,000 people with mental health problems shows that nearly two thirds are left feeling isolated (64%), worthless (61%) and ashamed (60%) because of the stigma and discrimination they have faced.

The findings are released on a day when the nation is asked to have more open conversations about mental health in order to tackle this stigma, called Time to Talk Day (4 February). The day is organised by the Time to Change campaign, which is run by charities Mind and Rethink Mental Illness.

Despite the devastating effects of stigma, the survey ­– the biggest of its kind – found progress has been made with over half of respondents (57%) saying it’s easier to talk about mental health problems than in previous years. Sixty percent of people also felt better once they did start to talk about their mental health problems, saying they felt relieved and like a weight had been lifted.

This is why Time to Change is urging the nation to have more open conversations about mental health and to start this on Time to Talk Day, when thousands of others will be doing the same.

People are being asked to take part in a nationwide competition to see which county can have the most conversations about mental health. Once people have had their conversations they will be asked to log them on an interactive online map, which will be updated in real time to show which counties are talking the most throughout the day.

More than a thousand organisations will be taking part including O2, Royal Mail, the FA and Everton Football Club. As well as this, 500 secondary schools alongside universities and colleges, councils, national government departments and community organisations will all be joining in. Celebrities and politicians will also be supporting the day by tweeting selfies indicating which county they’ll be talking for.

A short film is being launched online to show the kinds of conversations that can make a big difference, supported by online and radio advertising. 48,000 tea bags and coasters – encouraging people to have a cup of tea and a chat – will be handed out with the Metro newspaper at London Victoria, Liverpool Street, Waterloo, Bristol Temple Meads and Liverpool Lime Street stations. On Time to Change’s website there are tips and tools to help people have their conversations.

“This survey shows that stigma is still having a huge impact on how people feel about themselves and holding back their lives. We have got to continue to make progress, show that mental health isn’t something to be ashamed of and tackle the causes of stigma and discrimination.

“Having a day when we encourage the nation to talk about mental health collectively can give people the confidence to have these conversations and show that you don’t have to be an expert on mental health. We need to replace silence and stigma with talking, greater understanding and support.”

Join in the conversation online using the #timetotalk

For information and to get involved in Time to Talk Day visit http://www.time-to-change.org.uk/timetotalkday