Use the Stairs, not the Lift!!

Home/Use the Stairs, not the Lift!!
Previous Next

Use the Stairs, not the Lift!!

I first saw this article on the “Academy of NHS Fab Stuff” Web site and thought it worth reproducing.  Moving around more at work – be it standing at your desk or using the stairs is all part of good back health.

Hospitals as far afield as Somerset and Aberdeen are embarking on a Department of Health backed stair climbing initiative to combat sedentary behaviour among staff and patients.The London based startup StepJockey uses evidence based stair prompts and digital gamification to encourage staff to ditch the lift and take to the stairs in order to build greater physical activity into their working lives.

The initiative is proving popular with NHS trusts including Royal Gloucester and Yeovil not only because it provides a low cost, fun and inclusive way of boosting staff fitness. It is also driving productivity savings by:
● cutting lift waiting times and energy costs
● saving staff time (up to 15 minutes a day, according to one study)
● setting a positive example for patients on preventative health and exercise

Many hospitals want not just to keep their staff fit and healthy but to set a positive example for patients and visitors. At their launch, Joy Turk, of NHS Gloucestershire said: “Every floor features the signs and indicates how many calories you will be burning. We are also using signs by the lifts to give people a small nudge to perhaps consider taking the stairs.”

StepJockey was seed funded by the Department of Health via the Small Business Research Initiative (SBRI) and is spreading fast. More than 6,000 staircases in more than 90 countries have been rated for calorie burn using StepJockey’s smart signs and gamification platform. The system works by placing StepJockey smart signs outside the entrances to hospital staircases. As recommended by NICE , the signs encourage stair use by giving passers by a simple visual nudge or reminder to use the stairs rather than the lift or escalators.

The StepJockey signs can also be read by free mobile phone apps and this allows hospitals to launch stair climbing challenges. This encourages long term engagement (a problem with conventional stair prompts) and further incentivises stair use through a sense of fun, teamwork and gentle competition. Huntsville Hospital System, which runs 9 hospitals in Alabama, has StepJockey signs installed in 6 of its buildings. In the first 2 weeks of its Climb Everest challenge 242 staff and even some patients burnt over 103,700 calories. 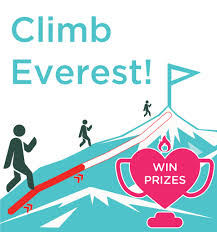 Since launch StepJockey has run 31 challenges in 6 different languages around the globe from Alabama to Australia. In total more than 61m steps have been recorded equivalent to 153,000 climbs of Big Ben .

Regular stair climbing has been shown to have a positive impact on an individual’s health over time. It is an accessible exercise for most people and is associated with a reduced risk of heart disease, stroke, backpain, some cancers, obesity and type 2 diabetes.

“Even at a slow pace, you’ll burn calories two to three times faster climbing stairs than walking briskly on the level”, reports theHarvard Medical School . “The Harvard Alumni Study found that men who average at least eight flights a day enjoy a 33% lower mortality rate than men who are sedentary — and that’s even better than the 22% lower death rate men earned by walking 1.3 miles a day”.
Return on Investment

StepJockey pays for itself within a year to 18 months by generating health, carbon and time savings. It is thought to be especially effective for hospitals where lift waiting times can prove particularly problematic for both staff and patients. A Canadian studyestimated that hospital staff would save 15 minutes a day by taking the stairs instead of lifts. In turn, lifts are left free for patients and others who most need them.
Jim McManus, Director of Public Health, Hertfordshire County Council, said: “StepJockey takes the evidence and insights from social and behavioural sciences and turns them into something simple and easy to take up. Our return in terms of reduced carbon emissions and healthier employees will far exceed the small initial investment.”

If you are interested in installing StepJockey, the company recommends sharing its promotional video among key stakeholders as a first step. High level buy in from the leadership, communications and facilities teams are essential for a successful NHS implementation.

Helen Nuki, cofounder of StepJockey, said: ‘We love working with the NHS because health is its core business and there is such a solid understanding of the evidence around incidental physical activity and its benefits’.